Adverbs, words that describe or modify verbs, should be avoided whenever possible. If you’re using an adverb, it’s likely that you should be using a different single word instead of the adverb+verb combination. Instead of saying that someone is speaking quietly, say that they’re whispering. If someone has turned quickly, maybe you could say they’ve pivoted.

Of course, there are exceptions to every rule, but in this case it’s rare. There may be times when you can’t think of a single word to replace the adverb+verb combination, but it’s likely that there is an option out there. And even if there isn’t, instead of using an adverb+verb, try using an analogy (I’d actually recommend using analogies regularly, though I’ll go more into detail in a later post.)

‘Very,’ ‘extremely,’ ‘really,’ and ‘quite’ are interesting adverbs. Unlike regular adverbs, which describe or modify verbs, these words describe or modify other adverbs or adjectives. If regular adverbs should be avoided, then these modifiers of adverbs/adjectives should be removed from your lexicon entirely. If saying John spoke loudly doesn’t work then it’s a no-brainer that John spoke very loudly isn’t going to be any better – it’ll be worse, in fact. John didn’t speak loudly nor very loudly. John yelled. It’s more descriptive, less subjective, and keeps the story moving. If the dress was very blue it was as blue as the waters of Atlantic Ocean on a cloudless summer afternoon. Now that’s one blue dress!

The only time when these words should be used is to add emphasis to adjectives when there isn’t an adequate single word replacement for the combination and when using an analogy would disrupt the flow of the story (e.g. very new or extremely sick.) While this is a little loophole, it should still be avoided whenever possible.

Don’t just take my word for it. Listen to a writer who’s work we’ve all read at some point in our lives, Mark Twain. 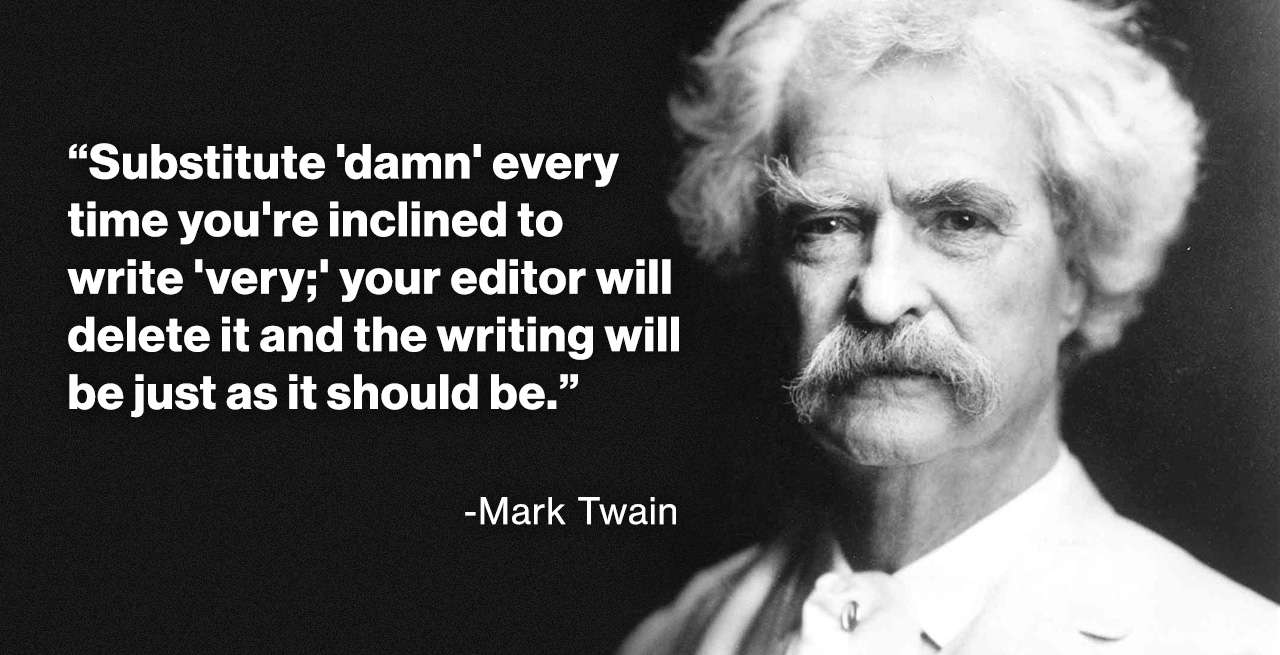 “Substitute ‘damn’ every time you’re inclined to write ‘very;’ your editor will delete it and the writing will be just as it should be.” -Mark Twain

Regardless of whether you’ve read his stories or liked them/him, he was a talented writer who’s writing tips are just as applicable today as they were a century ago.

Use an analogy to describe pain felt when you step on a Lego. Let us know what you come up with in the comments below.

To write fiction, one needs a whole series of inspirations about people in an actual environment, and then a whole lot of work on the basis of those inspirations.